wordsmith
I am a Christian with a B.S. & M.S. in Mathematics. I am married, with two kids who are my pride and joy. I speak three languages (English, Norwegian, and German) and am learning two more (Korean and Japanese).

Below are a couple of pins that I found a number of years ago among my grandfather's stuff. I have no clue as to their origin, or where or when my grandfather came to possess them. From what I've found on the internet:

If anyone knows about the history of these items, feel free to share your knowledge in the comments. 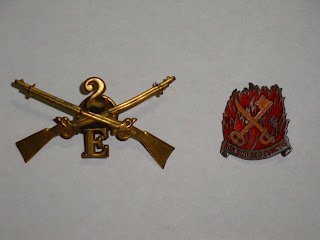 Below is a picture of my grandfather. There are no markings on the picture itself, and only the year (1912) on the backing, which year I have no reason to doubt, given how young my grandfather is in the picture. He is clearly dressed in some sort of uniform (reminds me of a mounty, with the jodhpur-type pants), and appears to be bivouacking somewhere.

I don't know if my grandfather was a citizen at the time this picture was taken - would it be possible for a non-citizen to enlist in the Army? If the year is indeed correct, this would be pre-WWI. 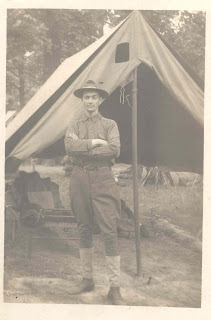 Again, comments (especially enlightening ones :) ) are welcome!
Posted by wordsmith at 6:44 PM